If looked at for characteristics and what capacities are—such as being able to hover, fly backwards, fly at up to 60 miles per hour, and migrate for thousands of miles—it’s no wonder why hummingbirds draw such awe and curiosity. Here are some noteworthy hummingbird facts compiled from www.worldofhummingbirds.com and the “Complete Book of Hummingbirds.”

A hummingbird wings beats about 70 times per second and they will beat up to 200 times per second when diving. Their wings rotate in a full circle. Hummingbirds are the only birds that can fly both forward and backwards and can hover in mid-air, fly sideways and upside-down. A hummingbird can fly an average of 25-30 miles per hour though when diving, they can reach speeds of up to 60 miles per hour.

A hummingbird’s tiny little powerhouse of a heart beats up to 1,260 times per minute. Though their hearts are miniature, a hummingbird’s heart is 2.5% of the total body weight and will take about 250 breaths per minute while at rest. Interestingly, a hummingbird’s metabolism is roughly 100 times that of an elephant. They weigh anywhere between 2 and 20 grams (a penny weighs 2.5 grams) and 30% of a hummingbird’s weight consists of flight muscles.

When at rest and when they sleep at night, hummingbirds go into a hibernation-like state called “torpor” to conserve energy. As they enter torpor, their metabolic rate becomes one-fifteenth (1/15) of normal sleep. Torpor drops the heart rate to as few as 50 beats per minute and conserves up to 60% of a hummingbird’s energy store and body temperatures drop to 70 degrees. One they awaken, ready for their new day, it can take up to an hour for a hummingbird to recover.

Hummingbirds have similar properties to a chameleon in that they can flash bright colors, or hide them when needed. The bright colors of bright pink, green and yellow are located on their neck feathers which is called a Gorget. An average sized hummingbird has about 940 feathers on their body. Females are typically larger than male hummingbirds and don’t have as much coloring on their necks. 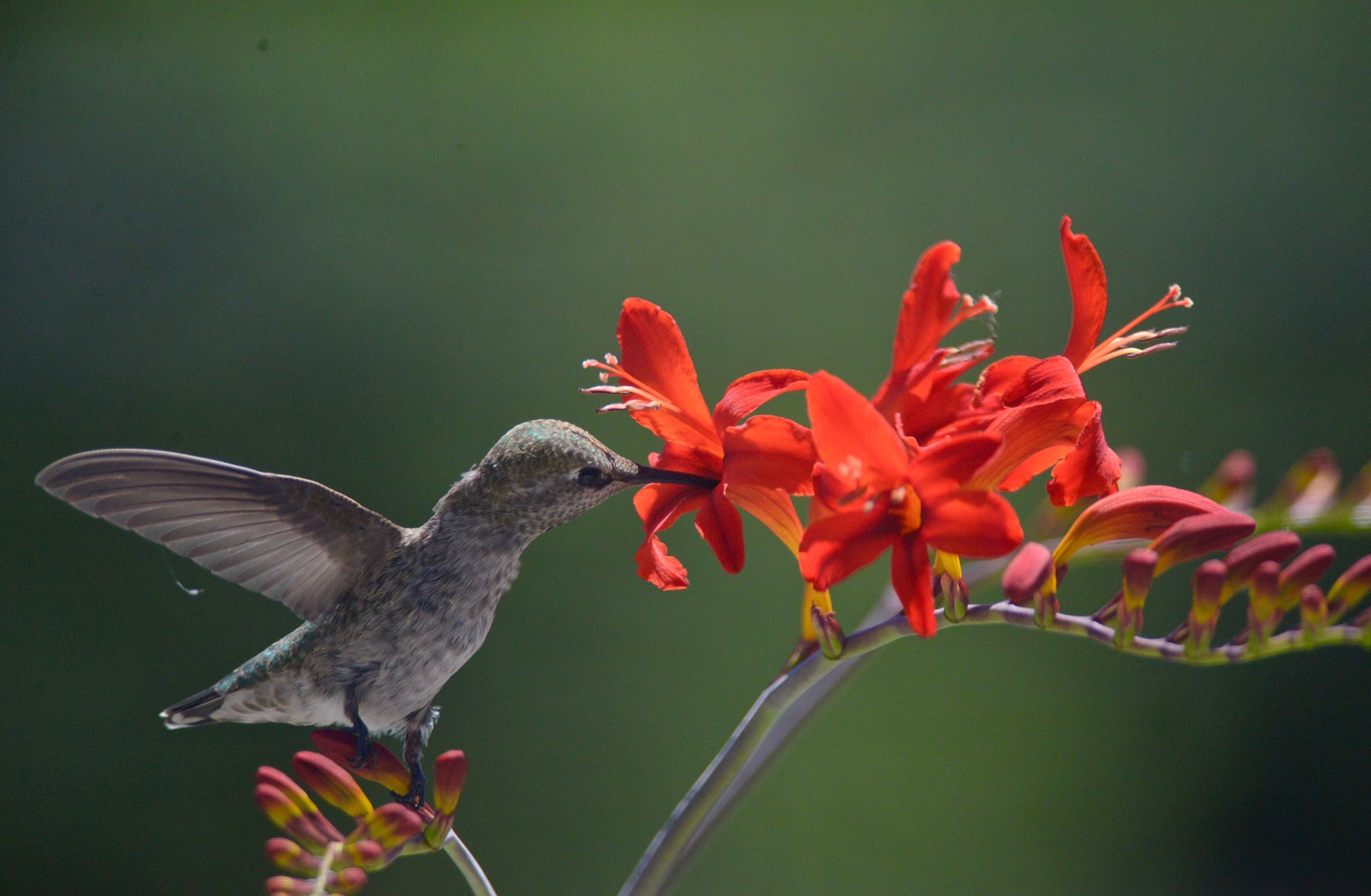 Females also have some other distinct traits. When it comes to tending to the babies, females do all the nest building. They prepare the nest out of fine spider silk they collect from webs, small twigs and bits of leaves. They then lay a clutch of two eggs at a time and each individual egg is smaller than a Tic Tac. Once hatched, babies grow relatively quickly. They remain in a nest only for three weeks and then are able to fledge, fly and feed for themselves.

Hummingbirds live surprisingly long for their little size; they have an average life span of about 5 years but can live to to ten years. The smallest hummingbird, a bee hummingbird, is the smallest living bird, no bigger than bumble bee, and weighs less than a dime. The largest hummingbird is the Giant Hummingbird. It has a wingspan of 8.5 inches. It dwells in northern Ecuador to Central Chile, Bolivia, and Argentina. 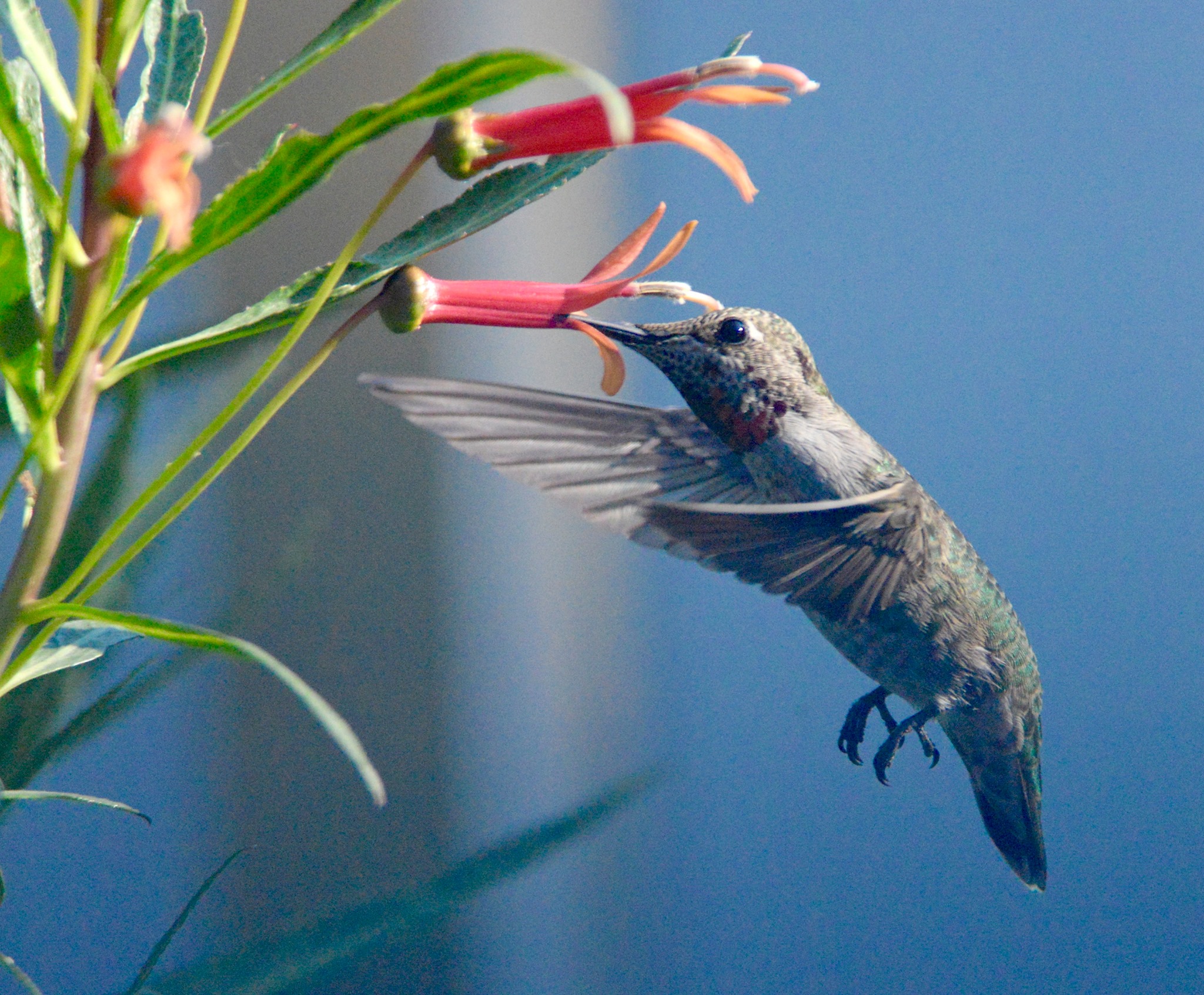 The Aztec god of war, Huitzilopochtli, (pronounced Weetz-ee-loh-POSHT-lee) is often depicted as a hummingbird. Aztecs believed that dead warriors were reincarnated as hummingbirds. Mayan people believed the hummingbird, Tzunuum, was created by the Great Spirit who they understood gave her the superpowers as the only bird which could fly backwards and hover. It is believed her gifts of bright colored feathers were offered as wedding presents, each color of each feather offered as a present from another in the animal kingdom so she may be beautifully plumed for her wedding.

People from the Caribbean have named hummingbirds “Yerette” in the original Amerindian language. Older civilizations and even into today believed hummingbirds were magical souls of ancestors who have passed on. They pray to the hummingbird through rituals and hummingbirds, in terms of national symbology, are on the national Coat of Arms, currency and passport.

For the Pueblo Nation, hummingbirds co-exist and cooperate with the Caterpillar, a Guardian of the tobacco plant. The Pueblo legend is that Hummingbird retrieves smoke from the Caterpillar to deliver it to Shamans for their earth purification ceremony. In exchange, Shamans use the Hummingbird to send gifts to the Great Mother who lived beneath the earth.

Another legend shares, “The Pueblo Nation also believes that many years ago, a demon lost a bet to the Sun and was blinded. The demon was so mad that he spewed out hot lava, catching the whole earth on fire. A hummingbird gathered rain clouds from all four directions to put out the fire, saving all life on earth. As the hummingbird flew away, he flew right through a rainbow creating the bright colors on the hummingbird’s throat. Since then the Pueblo Nation will do a hummingbird dance with hummingbird feathers to bring rain.”

The Math & Magic of the Aurora Borealis

Every once in a blue moon there’s a report about having an opportunity to spot the Aurora Borealis here in Oregon. These media reports are often quite misleading because they are accompanied by photos and videos of brilliant green ribbons spooling down from the sky. These images permeate many falsehoods about the experience of witnessing the Northern Lights, here in Oregon, and other places for that matter, and raise false expectations about what people will see and when.

First, let’s look at the “IF.” According to space.com, “Astronomer Galileo Galilei named the aurora borealis after the Roman goddess of the dawn, Aurora, and the Greek name for wind of the north, Boreas. The aurora australis, or the southern lights, occur over the south pole.” Since the South Pole is mostly inhospitable, viewing the southern lights is more of a challenge.

The birth of aurora events begin with the sun 93 million miles away. The sun has a tremendous amount of energy, gas and magnetic pressure. At the center of the sun the temperature is 27 million degrees Fahrenheit. The sun has spots, or magnetic centers which are cooler spots within the sun. As pressure, gas, and magnetic energy build and build, a giant bubble forms.

The pressure gets to be too much and it explodes, in a powerful flare, called a coronal mass ejection (CME). A major event can emit up to “1 × 1025 joules (roughly the equivalent of 1 billion megatons of TNT, or over 400 times more energy than released from the impact of Comet Shoemaker–Levy 9 with Jupiter.) The scope or size of a single flare could be compared to 30 earths stacked one on top of each other. These flares are the most powerful explosions in the entire solar system. These occur several times a day or approximately once a week depending upon how active the sun is. These flares cause huge bubbles of of magnetized gas to expel from the sun. The bubble of gas travels in space, rushing intensely in the solar wind, a million miles per hour. These are called geomagnetic storms. Depending upon how much force the bubble was released it can take anywhere from 17 hours up to three days to reach the earth’s atmosphere. 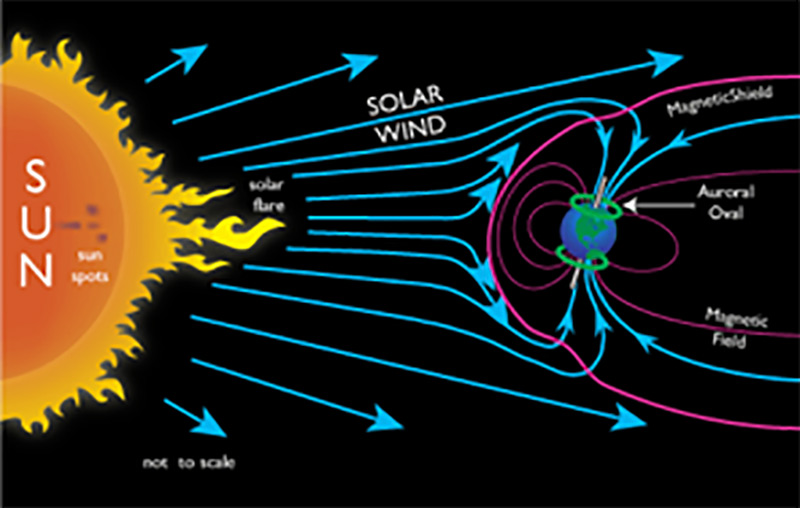 What also happens is the force of the flare is determined, and based on the extent of the expelled gas, the speed for which it is moving, if it picks up energy or slows down, scientists will evaluate the level of storm on a “Kp index.” The Kp numbers start at 0, and as the geomagnetic strength increases, so too does the Kp number. So Kp 0 is a weak or none existent aurora occurrence—though a 2 kp index could be seen in northern latitudes, whereas anything above 6, up to 9, is a major geomagnetic storm event which could likely cause visibility of the auroras in lower latitudes such as Washington, Oregon, or Michigan in the midwest and New York on the east coast. In Europe this would equate France or Northern Spain.

Once the energy wind hits the upper atmosphere, the wind’s charged electrons get drawn towards the centers of the earth’s poles and follow the magnetic field of Earth down to the Polar Regions where they collide with oxygen and nitrogen atoms and molecules in Earth’s upper atmosphere. “In these collisions, the electrons transfer their energy to the atmosphere thus exciting the atoms and molecules to higher energy states. When they relax back down to lower energy states, they release their energy in the form of light. This is similar to how a neon light works. The aurora typically forms 60 to 600 miles above Earth’s surface.” 60 miles is where they hover just above the earth’s surface, and the beams or curtains extend up to 600 miles into the atmosphere.
Our magnetic field guides the electrons and two ovals form over the center of the magnetic poles. Because the earth is on a curve, how far the curve extends out and down depends on the power of the storm. So, for instance, the higher up you are in latitude the more likely you are to see them; they would appear bright, and clear, and above your head, if you are in Alaska, such as Fairbanks. There, you are so far North, the latitude is beneath the region of the pole itself.

If you are further south in latitude, say Oregon, IF you were to see anything at all, it will be extremely low in the horizon and faint, appearing like nothing more than a fog cloud. You would not see the luminous green ribbons as advertised. Another myth that gets perpetuated comes from the fact that cameras pick up light better or more vibrant than the human eye. So all those colors of green, red or pink that are shown in photos, especially in lower altitudes, are only because the camera picked up on those color frequencies. You would not see them with your eyes. 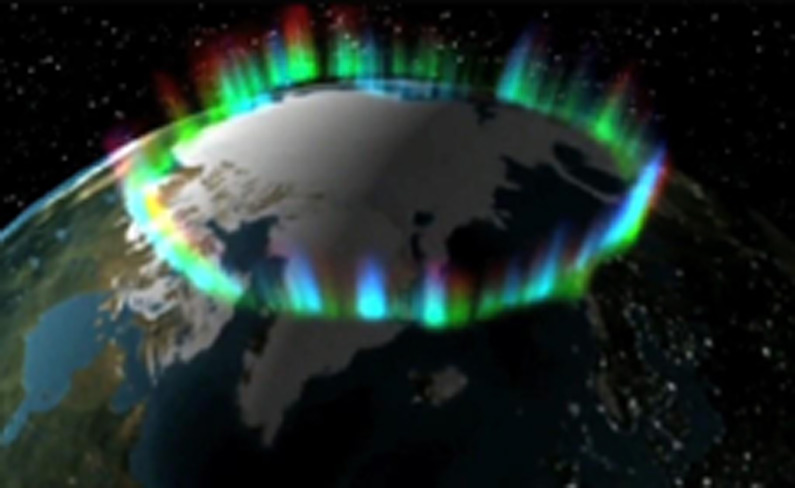 The best place to observe the aurora is under an oval shaped region between the north and south latitudes of about 60 and 75 degrees. At these polar latitudes, the aurora can be seen two-thirds of the nights of a given year. The longitude is inconsequential, in that you could see the same aurora effect from Finland, Norway or Alaska at the same latitudes around the globe. The way they appear to the human eye, if you’re in a high altitude, is like tall light rays that resemble a curtain of moving, breathing, rippling, glowing light. It’s surprising actually how fast they move.

Obviously you need darkness to see them so the best times for viewing are cold clear nights, with September and October heading in towards winter and February and March heading into spring. In the northern latitudes the nights are longer in the winter months so darkness is plentiful for viewing.

The next factor about the aurora to understand is what causes the different colors. Green is the most common color with yellow, blue, violet and white. In this amazing miraculous occurrence, when the particles collide with oxygen, green and yellow bands of light are created. Interactions with nitrogen produce red, violet, and occasionally blue. “The type of collision also makes a difference to the colors that appear in the sky: atomic nitrogen causes blue displays, while molecular nitrogen results in purple. The colors are also affected by altitude. The green lights typically in areas appear up to 150 miles (241 km) high, red above 150 miles; blue usually appears at up to 60 miles (96.5 km); and purple and violet above 60 miles. These lights may manifest as a static band of light, or, when the solar flares are particularly strong, as a dancing curtain of ever-changing color.”
The basic components of math then, are to determine as to whether or not you will be able to see the northern lights, are these: How strong the solar flare was; How long the flare is taking to travel the 93 million miles (distance x speed); what latitude you are on the planet, the time of year, the amount of darkness. 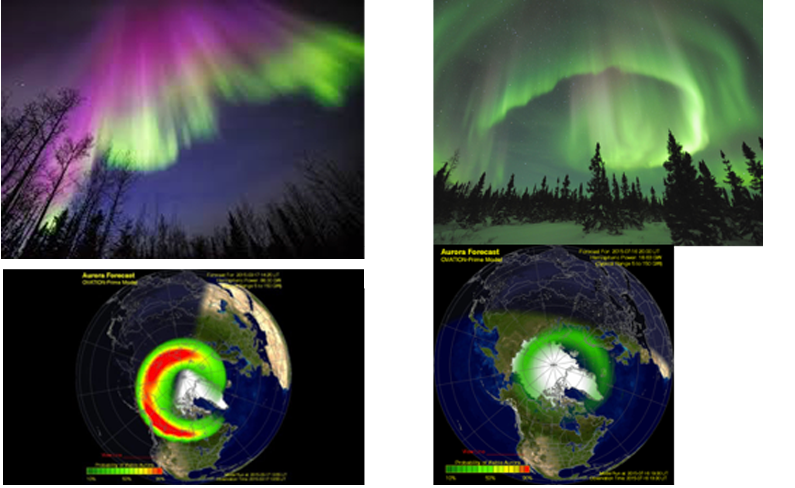