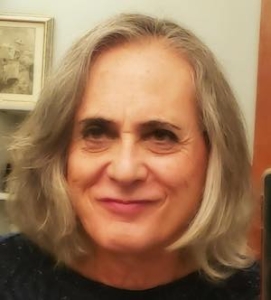 Lauren (former Steven) was born in Cheyanne, Wyoming and raised in St. Louis after his father died when he was 7. Lauren completed a Bachelor’s degree in Art and Psychology in 1973 and then a Master’s degree in Media Communications in 1979 at Webster University. In 1985, he married and had two daughters. Lauren moved her family to Denver in 1998 and built a real estate business with his wife. Transition –when Lauren’s marriage ended in 2015, she moved permanently to Santa Fe to pursue art and evolve into life as a woman. Since then, she has shown mixed media folk art that incorporates manmade and natural objects found into paintings on canvases of wood construction. Her playful work and colorful palette explore gender identity, feminine ideology, and personal, emotional experience as a transwoman.