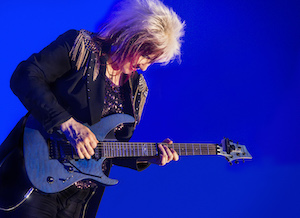 Stories About Touring With Michael Jackson, Jeff Beck, and Being an Artist

Jennifer Batten’s been playing guitar since age 8. In 1987 she was chosen from 100 guitarists to play on Michael Jackson’s BAD tour which travelled the globe for 1 1/2 years. She remained with Michael Jackson for ten years. Within a year of the HIStory tour’s completion, British guitar icon Jeff Beck asked her to join his band. She toured and recorded with him for 3 years. In 2009, Batten released her own CD and began touring her own music performing in sync with films she makes. She’s had 3 instructional DVD’s released by truefire.com. In 2011 she played a Las Vegas residency for Cirque Du Soleil. She continues to tour the globe with bands, to solos shows, to clinics, to master classes. In Jan 2016 she received the She Rocks Icon Award and shortly after, was inducted into Guitar Player Magazine’s “Gallery of the Greats.”

You Are A Writer. Period.