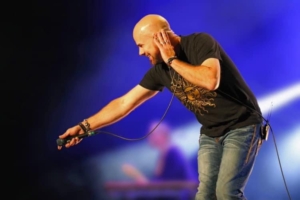 James Dylan is the singer of Jason Bonham’s Led Zeppelin Evening (JBLZE). In 2007 Led Zeppelin had recently performed their first full-length concert in nearly 30 years. Rumors circulated that the band was planning to tour, but were put to rest when singer Robert Plant announced that he had no plans to tour with Zeppelin. Jimmy, Jason and John Paul briefly entertained the idea of touring with another singer. Dylan was considered for the role after the band discovered him on the internet.

Though the highly anticipated Led Zeppelin reunion tour never came to be, Bonham still wanted to play the music and in February 2009 Jason and James began working together in what would become Jason Bonham’s Led Zeppelin Evening (JBLZE) – A show where Jason would perform his father’s music and share stories from the unique perspectives of being John Bonham’s son.