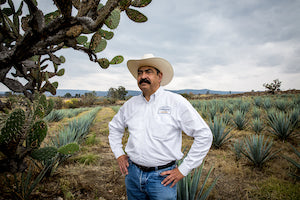 Tequila Alquimia founder, president, and CEO, Dr. Adolfo Murillo, was born in the small town of Agua Negra, where his grandfathers raised their families as an entrepreneur and farmer. When Adolfo was born, he witnessed the care and attention his grandfather Abelino gave to his land, crops and herds to provide for his family and the community around him. He always said, “Take care of the earth, and she will take care of you.”

We discuss life between bridging cultures, professions, and how these interest with Eyedentity.

When Adolfo and his family moved to the United States, he continued to visit the family in Mexico during the summers throughout his childhood. He went to school in the U.S. and on to receive his Doctor of Optometry degree. When his father was close to passing away, Adolfo and his wife convinced him not to sell the ranch but to keep it in the family. Adolfo’s father agreed not to sell it if Adolfo could find a way to make the land productive. Adolfo researched different crops and ultimately decided to grow agave, which had never been done before in this particular area of Los Altos de Jalisco.

Everyone thought they were crazy. They were told agave wasn’t grown in that area, so it would be impossible. The soil was dark brown, whereas tequila-producing agave is normally grown in soil that is deep red. In 1992, Adolfo conducted extensive soil tests and realized that with organic methods, it could be done. He combined the modern science he learned in the U.S. with the traditional agricultural methods employed by his grandfather in Mexico to produce an organic protocol that would change the small town of Agua Negra forever.

Me, My Selfie and Eye: Good Grief by Cheryl Jones