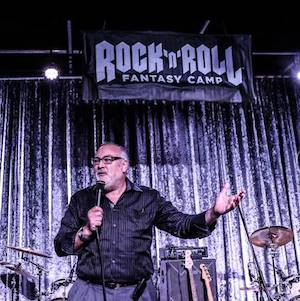 Whether he’s producing a tour, assembling an All-Starr band with Ringo Starr, or writing a best-selling book, there’s one thing David Fishof is always doing: dreaming. Hailed as one of the most innovative entertainment producers in the world, David’s been responsible for some of the most successful live shows ever brought to the stage. But of all the shows over his 40+ year career, one production stands out: Rock ‘n’ Roll Fantasy Camp. 25 years later the camp has given more than 6,000 folks from around the world a chance to live the rock star dream. Campers get to meet and jam with their musical idols—including Joe Perry, Vince Neil, Jack Bruce, and Jeff Beck—in legendary venues. In January 2021, Giant Films released Rock Camp, a documentary from Academy Award winner Doug Blush, covering the history of the Rock ‘n’ Roll Fantasy Camp, featuring interviews from campers and rock stars alike.

In addition to founding Rock ‘n’ Roll Fantasy Camp, David’s career highlights include reuniting The Monkees for their blowout reunion tour in 1986 and the British Rock Symphony (with Roger Daltrey, Alice Cooper, and Jon Anderson). David also worked with Ringo Starr to create the All Starr Band, and over its fifteen-year existence, David produced eight All Star Band tours.

David’s career has also spanned sports. He’s represented NFL greats Phil Simms, Mark Bavaro, Vince Ferragamo, and Jack Reynolds, as well as baseball stars Lou Piniella, Dave Magadan, and Randy Myers. David authored the best-selling book “Putting It On The Line” about sports and entertainment, and his second book “Rock Your Business” was an Amazon best seller. David resides in los Angeles and is the proud father of five, grandfather of seven and husband of Karen Finkel. Watch Rock Camp the Movie.

This site uses cookies. By continuing to browse the site, you are agreeing to our use of cookies.

We may request cookies to be set on your device. We use cookies to let us know when you visit our websites, how you interact with us, to enrich your user experience, and to customize your relationship with our website.

Click on the different category headings to find out more. You can also change some of your preferences. Note that blocking some types of cookies may impact your experience on our websites and the services we are able to offer.

These cookies are strictly necessary to provide you with services available through our website and to use some of its features.

Because these cookies are strictly necessary to deliver the website, refusing them will have impact how our site functions. You always can block or delete cookies by changing your browser settings and force blocking all cookies on this website. But this will always prompt you to accept/refuse cookies when revisiting our site.

We fully respect if you want to refuse cookies but to avoid asking you again and again kindly allow us to store a cookie for that. You are free to opt out any time or opt in for other cookies to get a better experience. If you refuse cookies we will remove all set cookies in our domain.

We provide you with a list of stored cookies on your computer in our domain so you can check what we stored. Due to security reasons we are not able to show or modify cookies from other domains. You can check these in your browser security settings.

These cookies collect information that is used either in aggregate form to help us understand how our website is being used or how effective our marketing campaigns are, or to help us customize our website and application for you in order to enhance your experience.

If you do not want that we track your visit to our site you can disable tracking in your browser here:

We also use different external services like Google Webfonts, Google Maps, and external Video providers. Since these providers may collect personal data like your IP address we allow you to block them here. Please be aware that this might heavily reduce the functionality and appearance of our site. Changes will take effect once you reload the page.

The following cookies are also needed - You can choose if you want to allow them: